I am an eclectic educational leader with an uncompromising commitment to dynamic and state-of-the-art educational programs and events.  I have been blessed in my training and experience to work with the iconic names of the educational profession, as an educator, administrator, non-profit executive director and wind conductor.   My mentors include Dr. Tim, Lautzenheiser,  Harry Wong, Madeline Hunter, H. Robert Reynolds, and Frederick Fennell. I am a dedicated, life-long learner with commensurate skills that encompass an educational presence unique in the industry today.  I have developed educational programs in middle schools, high schools, universities, and international non-profit organizations. In addition, I have presented more than 100 workshops and clinics at educational gatherings in Texas, New Mexico, Arkansas, Indiana, Oklahoma, Florida, New York, California, Arizona, London, Singapore, Cape Town, Johannesburg, Maastricht, Amsterdam and Mexico City.  Topics include:  “Technology in the Classroom,” “Developing Grant-writing as a Means of Support,” and “Building Leaders Inside Your Team.”  In 2011 I was honored by the US Army and the National Association for Music Education as the first recipient of the National Band Director of the Year Award.  In 2012, I was the Indy Star’s “Most Influential Educator in Indiana.”  In 2014, my first book, “The Ignition Point” is slated for publication.  The first of three books, “The Ignition Point:  Striking the Match,” chronicles my personal journey and experiences in the urban schools of Indianapolis, IN.

Released “The Ignition Point-Striking the Match” in December of 2014.  Readers discover the power of retaking control of their bodies, minds and spirits to lead they lives they were intended to live.

Launched the business model for educational, inspirational and life-changing literature.

Developed the band program in this urban to school that grew from 11 to 150 students in less than 5 years.   Targeted improvement in graduation, attendance, and musical objectives that exceeded local and state expectations. First urban school ever to enter the Music for All Grand National Marching Band Championships.   ISSMA Gold medal ratings in Concert, Marching and Sight Reading. Local, State and National Recognition for Musical Achievement while in this position

Headed the “Think Tank” that created the educational program for Drum Corps International. Responsible for the development of programs, curriculum, funding, and implementation strategies for this international youth-music organization.

Artistic and Administrative oversight for the Brenham High School Band program.  Developed the band program into the largest 4A program in the state of Texas, while advancing to the State Wind Ensemble Finals for 10 Consecutive Years.

Articulate and inspirational conductor with commensurate gesture and communicative skills.  Creative programing, composing and arranging skills, as well.  Competent with most all music technology, Apple hardware and related musical interfaces.

Music Educator and GLASSMEN Board Member, Gary Doherty, was named the first recipient of the ‘2011 All American National Band Director of the Year’ by the National Association for Music Education (MENC), and the United States Army.  The honor was presented in conjunction with the All American Bowl in San Antonio, Texas, and was based on several items such as impact on students lives, professional impact at-large, and competitive success at the state and national levels.

Gary is the Director of Bands at Arsenal Technical High School in the Indianapolis Public Schools, where during his 2-year tenure the program has grown by more than 400% with the addition of a Jazz Band, Drum Line, Winter Guard, Winter Percussion and a Steel Band.  Prior to coming to Indianapolis, Gary spent 30 years in the public school systems in Texas, and most recently as the Director of Bands and Cluster School Coordinator for Midland High School in Midland, Texas.

In addition to his teaching duties, Gary is an active performer with the Indiana Wind Symphony, and a sought after ensemble clinician for school corporations, MENC, the Indiana Music Educators Association, Music for All’s Summer Symposium, Texas Music Educators Association, Texas Bandmasters Association, the University Interscholastic League of Texas, Phi Beta Mu International, Drum Corps International, and the American College of Sports Medicine.  Currently, Gary is a member of the MENC Blue Ribbon Committee on National Standards for Marching Band, sits on the advisory board for the College of Sports Medicine Professionals’ Athletes in the Arts Initiative, and serves on the Board of Directors for the GLASSMEN Drum & Bugle Corps.

Congratulations on a well deserved honor! 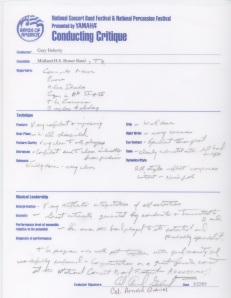 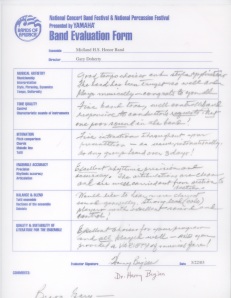 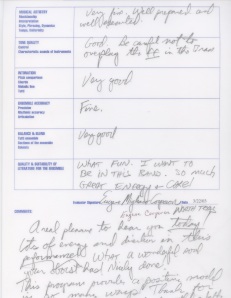 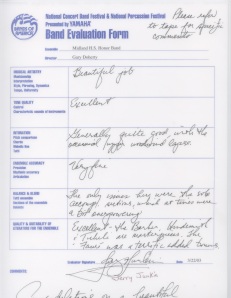 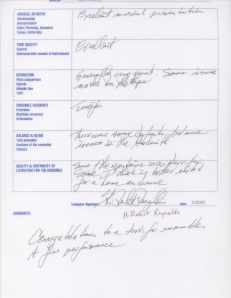 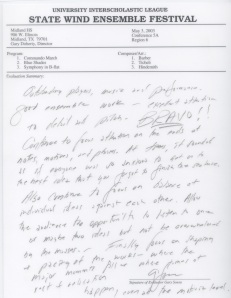